I love this picture( I know…I know…I say that every week when I post a pic…but I really mean it this time). You know what makes it especially pretty to me? You can’t see Joe’s feet! 😆 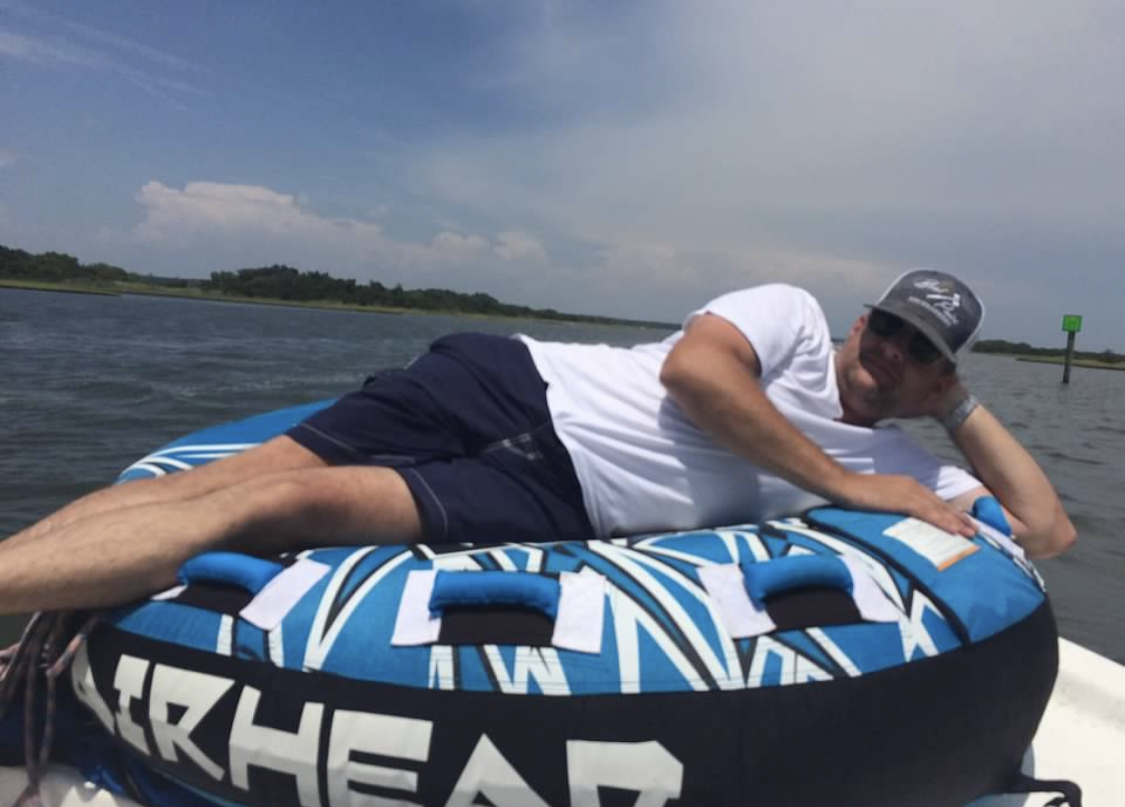 Now, you all know me well enough by now to know that there was not one speck of Joseph Morgan Price that I didn’t love to pieces, but I did love to give him a hard time about his feet! Granted, he was a working man who generally kept those puppies under a pair of heavy shoes, so it stands to reason that his feet were not tanned. But, y’all….the man had the WHITEST feet I have ever seen. And his toenails…well, it wasn’t anything a good pedicure couldn’t fix, but he flatly refused, so I gave him heck about those, too.

IN MY DEFENSE, I only started picking on his feet because he gave me such grief about my forehead. He referred to it as “Grandma’s Attic”, and not because my noggin is full of nostalgic trivia, sweetness and good recipes! Nope. You know that part of a big U Haul truck that extends out over the cab of the truck?? That is also referred to as Grandma’s Attic…and THAT is where he got the name. Big forehead, cankered feet…picking on each other was part of our love language, I promise! 😊

This week, Joe’s lesson is about what we have hanging over our heads, and what Jesus has under His feet.

A couple of weeks ago, I talked about making time for God each day by spending time studying His word and in prayer. Scripture tells us of several times that Jesus spent time alone with God.  One of those times was after he fed the 5,000 with the five loaves and two fishes. He sent the disciples on to their next destination, and he stayed and went up to the mountains to pray. We find in the book of Matthew right after this already busy day, another account of the works of Jesus.

Matthew 14: 22-32: “Immediately Jesus made the disciples get into the boat and go on ahead of him to the other side, while he dismissed the crowd. 23 After he had dismissed them, he went up on a mountainside by himself to pray. Later that night, he was there alone, 24 and the boat was already a considerable distance from land, buffeted by the waves because the wind was against it.25 Shortly before dawn Jesus went out to them, walking on the lake. 26 When the disciples saw him walking on the lake, they were terrified. “It’s a ghost,” they said, and cried out in fear.27 But Jesus immediately said to them: “Take courage! It is I. Don’t be afraid.”

Then Peter got down out of the boat, walked on the water and came toward Jesus. 30 But when he saw the wind, he was afraid and, beginning to sink, cried out, “Lord, save me!”31 Immediately Jesus reached out his hand and caught him. “You of little faith,” he said, “why did you doubt?”32 And when they climbed into the boat, the wind died down.“

The obvious point of the story is that the disciples were afraid and worried about what was going to happen to them out on the sea in this terrible storm, and when they put their faith in Jesus, everything calmed down and they were saved. The most dangerous thing the disciples were concerned  about was, of course, drowning, but Jesus proved his dominion over this by walking on the water that was so dangerous.

Think about this scripture when you are faced with troubles in everyday life. Remember that Jesus is in control and that what we feel is over our heads is truly under Jesus’s feet.

I assure you he said it with compassion and love, but Joe often referred to me as a “walking catastrophe” (I think what he really meant was “Bless your heart, you do make things hard on yourself sometimes”). He wasn’t wrong.
I am often a hot mess. Perhaps that is why I can identify with Peter just a little. He was often times a hot mess, too.

Peter had a temper. I have a temper, too. Peter loved Jesus immensely, but acted impulsively. When Jesus was about to be arrested and tensions were high, Peter reacted in anger and cut off a man’s ear! The last miracle Jesus performed before his crucifixion was healing that man by attaching his ear to his head again. I can imagine that Jesus might have shaken His head as He acted to undo the damage Peter had wrought. Joe said (more than once) that I had a tendency to let my mighty mouth write a check that my hummingbird hiney could not cash.😆Jesus might have had the same thought about Peter. Bless his heart!!

Although Peter loved Jesus immensely, he denied Jesus three times. And Jesus called it before it happened! He told Peter that he would deny him three times before the sun set, and although Peter assured Jesus that he would never do such, well…Peter did just what Jesus predicted. Part of me wants to be a tiny bit judgy here and say, “Dude?? How could you? It was JESUS!” But, then I remember that, like Peter, I love Jesus immensely. And also like Peter, there have been times when I have denied him, too, in the name of being accepted socially, in the name of selfishness and/or comfort, and even when I had no real excuse at all.

And then there’s the story Joe recounted in his lesson this week. First of all, Peter had the audacity to ask Jesus to prove himself. “If you are who you say you are then…” Jesus had the power to really scare Peter to death at that point. He could have played all kinds of tricks on Peter, who was already in a pretty fragile state. But, that is not what Jesus did. He simply said. “Come.”

Peter stepped out, and lo and behold…the man walked on water!! I mean, does it get any cooler than that?? However, he takes his eyes of Jesus, becomes fearful of the windy storm and begins to sink. Again, I am tempted to say, “Son…WHY? Why did you look around you? You literally had the power of Jesus under your feet. How much proof do you need?” But I don’t say that…because I recognize the fact that in this circumstance, Peter just might be my spirit animal.

So, here’s where I am willing to cut Peter some slack (and maybe cut myself a tiny bit as well). Instead of focusing on what Peter didn’t do, let’s consider what he did. In the middle of the storm, with the wind whipping around and beating him all about the face, Peter stepped out in faith. He locked eyes with Jesus and he stepped out. Sure, he faltered. But he took that first step. And in my opinion, that first step is often the scariest one to take.

Even in the midst of the storm, the bottom of the rocky boat must have seemed more secure to Peter. It was what he knew. Yet, he put what must have been a shaking foot in front of him. And then another. Yes, when he took his eyes off of Jesus, he began to sink. But he didn’t flail around, spitting and sputtering. He didn’t take matters into his own hands and try to swim back to the boat. He cried out to Jesus. He asked Jesus to save him. And Jesus did. That’s what He does.

I picked on Joe’s pasty white feet. A lot. But, when I climbed in bed at night and my own little tootsies were freezing, the first thing I did was tangle my little feet up in his big ones, because they might have been white, but they were always warm! Joe didn’t kick me away. He might have grumbled just a little, but then he’d draw me in just a little closer so I could thaw out and drift away into a peaceful sleep (until he woke me up with his snoring, but that’s another story for another day…).

Joe picked on my big old forehead. A lot. But, before he went to work each morning, and before he went to sleep each night, he kissed it and whispered, “I sure do love you.” And, because I am who I am, and I just cannot leave well enough alone, I’d usually whisper back, “Well, you’d be crazy if you didn’t.” 😇

Peter loved Jesus and Jesus loved him right back. Peter was often the conductor of the Hot Mess Express, but Jesus always had his back (and his feet). I know from years of experience that it is easy to get caught up in all the ears you’ve cut off in anger, all the times you’ve denied what was right in favor of what was easy, all the times you’ve taken your eyes off Jesus and found yourself sinking. We let it swirl around us and beat us up, and if we are not careful, we can let it rock our boats to the point they tip over. You know who doesn’t hold against us all the messes we’ve made? Jesus.

Despite our imperfections, our tempers, our unfortunate looking feet or ginormous foreheads, Jesus is unphased. He loves us anyway. He wants us anyway. Shoot, maybe the fact that we are all walking catastrophes makes Him love us even more.

Jesus sure does love you. He loves you enough to hold out His hand and say “Come.” He loves you enough to keep you from sinking in the storm. If you’ll let Him, Jesus will walk you across the waves and help you into His boat. He will keep you warm and fill you with a peace that passes all understanding. All Jesus asks is that you take that first step, and when you falter, that you call out His name. He will scoop you up and kiss you on your Grandma’s Attic. Do let Him love on you, my friend.

-Words of Wisdom from The Book of Joe

6 thoughts on “Foreheads and Feet”